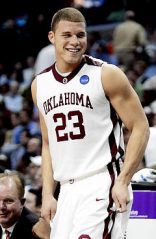 I hope everybody realizes what a rare player he is.  Athletically he is a freak, that’s obvious.  He made Tyler Hansbrough look fairly average last week in the tourney.  But he couples that athleticism with solid fundamentals, playing good defense and rebounding like an animal (he led the country in rebounding).

Mostly, he is rare because he doesn’t celebrate much, you often see him helping players from the opposite team off the floor, and he is a family man.  The primary reason he returned for his sophomore year (and went to OU in the first place) was because he respects his older brother’s opinion.  He and Taylor Griffin won multiple state championships at Oklahoma Christian School.

And lastly (just take a minute to watch these)…anybody who hustles like this while having the ability to do this is ok in my book.

sports from a guy who didn't even play jv