You have to love how the sports seasons align.  It really is brilliant.  Just when the NFL season ends, college basketball gets good.  Just when the Final Four ends, baseball starts and the NBA Playoffs are just around the riverbend.

For those who have not been paying attention, this has been a good year to be an 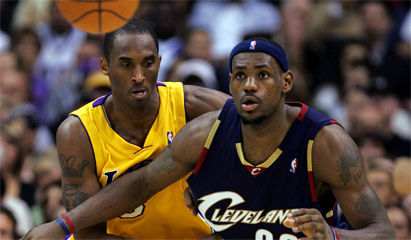 David Stern must be loving life right now with these two guys playing in his league.  The two best players in the world happen to be playing on the two best teams in the league.  They both have charasmatic personalities and, by the time they’re both done, they will have established themselves as 2 of the top-10 players of all-time.  Yes, I just said that.

Dwight Howard is a physical freak.  Chris Paul brings the playground to the NBA and does it well.  Dwayne Wade is an absolute stud (in the class of Kobe and Lebron, but his team keeps him out of the #1 discussion above).  Chauncey Billups is reminding people that he is really good at basketball regardless of the team he’s on.  Brandon Roy is the new guy in town, and is making me more resentful of Kevin McHale with each game he plays (the T-Wolves drafted him and then traded him).

I’ll be the first to say that I appreciate how the Spurs play.  The Big Fundamental is consistently underappreciated.  But I’ll also be the first to say that they are boring.  Effective?  Extremely.  Entertaining?  No.  They’ll make the playoffs, but now that Manu Ginobli is gone for the season, they won’t get far.  That leaves room for more fan-friendly teams like the Blazers and Jazz and…everybody else.

The Eastern Conference has basically been the JV version of the West since Michael Jordan retired (from the Bulls).  But now the East is home to 3 of the top 4 teams in the league with the Cavs, Celtics, and Magic leading the way.  Not to mention, the Atlanta Hawks play a pretty fun brand of team basketball, and Dwayne Wade always makes the Heat a dangerous squad.

Lesson for today:  watch the NBA Playoffs this year.  You will not be disappointed.

sports from a guy who didn't even play jv